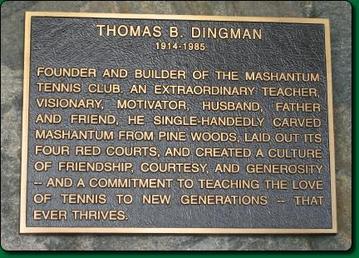 In 1946, at the urging of old friends who envisioned a summer program of tennis lessons for Dennis youth, Tom Dingman became the founder and visionary  of Mashantum Tennis Club, known in the early days simply as "The Dingmans'." During the first eleven years, the Club's home was on one, and then two, clay courts on the Nobscussett Rd. property of Donald and Frances Aldrich. The first year opened with six children in the lesson program and many adult players and spectators in the afternoons. As it does to this day, the Club embraced the feel of community and family and stressed the values of respect, honesty, and good sportsmanship. The lesson program has remained integral to the Club and produced many future instructors. Adult play has always been on a share and share-a-like basis.

Mashantum became a permanent and cherished fixture in the Town and the numbers of children and adults burgeoned, a larger space was needed. In 1955 Tom set to work clearing land for the four red clay courts and the family home on property purchased from the Aldriches further north on Nobscussett Rd. This remains the site of the Club today. While over the years modern conveniences such as phones, new fencing, and sprinkler systems have been installed, the "Shack," headquarters of the Manager, remains the same, as does the aura of peace and simplicity of the surrounding woods.

Unexpectedly, Tom Dingman passed away in February 1985. The huge hole that was opened in the fabric of Mashantum was quickly filled by Tom's daughter, Mary Dingman Wideman, followed ten years later by Lucy Shepard. Through all the Mashantum years, until her death in 1995, Tom's wife Allie remained Mashantum's matriarch and anchor to her family, friends, and the Club, as well as a founding member of the Dennis Conservation Trust.

The community rallied its support again in the end of the 90's. After several years of hard work by all involved, especially, Murray Howe and Rich Johnston Club members and its legal team, the Dingman family, the Dennis Conservation Trust, and Mashantum worked out a complex arrangement whereby the family gave approximately two acres of land containing the tennis courts and the Shack to Mashantum. Subsequently, many Mashantum members made financial contributions to the Dennis Conservation Trust, and the Trust purchased most of the surrounding woods from the family, to be preserved in perpetuity. As in the old saying that it takes a village to raise a child, it once again took the community to keep Mashantum the very special club that it is. Its very existence today is testimony to all those who have cherished its mission and given of hard work, wisdom, financial support, willing involvement, friendship, and joyful play: instructors and head instructors, maintenance crews, students, members, the Board and other friends. Sixty-four years after its founding, Mashantum remains a truly miraculous place.

The above brief history of Mashantum was written by Mary Dingman-Abel, author of the 50 page booklet “Mashantum Tennis Club 1945-2005”. To obtain a copy of the publication, please contact the Club Manager.