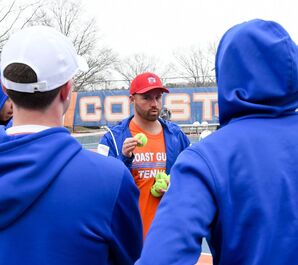 We are very excited to welcome Jordon Smith as our New Head Tennis Professional and Club Manager. He has extensive experience playing, coaching, & teaching tennis.

Jordon is currently in his 4th year as the Head Men’s Tennis Coach at the U.S. Coast Guard Academy in New London Connecticut. Coast Guard is currently ranked #13 in the Northeast for NCAA Division Three Men’s Tennis. Prior to Coast Guard, Jordon coached at Ithaca College and Wheaton College as an Assistant working with both the Men’s and Women’s programs.

Jordon is familiar with the Cape having spent 5 years as an Assistant Tennis Professional at Ocean Edge Resort where he was responsible for running the Junior Tennis Program. Jordon has worked the past two summers teaching at the Wadawanuck Club in Stonington Connecticut. He’s worked with all ages and levels in his tennis coaching/teaching career and is excited to bring his expertise to Mashantum!

We look forward to introducing Jordon to the Membership when the Club opens in May and have no doubt that Jordon will lead us in a fun and energetic 75th Season!

Ryan Julian - Ryan has been in the lesson program at Mashantum Tennis Club since he was five years old. He is the oldest of four children who all play tennis at Mashantum and a recipient of the Club's Dingman Cup. He graduated from Catholic Memorial High School where he played #1 Singles for their tennis team, was Co-Captain & an All-Star. Ryan now attends College of the Holy Cross and is a rising senior majoring in English. He enjoys coming back to Mashantum each summer and is again excited to be a part of the Mashantum teaching staff.

Will Gardner - A staple of his life and tennis career, Will has been part of the Mashantum community since the age of five. He is a three-time winner of the Club's Men's Singles Tournament and recipient of its Aldrich Cup. Will graduated from Wayland High School where he played second singles and first doubles on their varsity tennis team, and was a part of their Division II State Championship team his freshman year. He also reached the top 40 in the Boys’ 18 Singles division for USTA New England and competed on the national level in doubles as well. Will now attends Wake Forest University and is a rising sophomore. He is thrilled to be back at Mashantum and become the latest addition to the staff this summer.

James Julian - James Julian has been playing tennis at Mashantum since he was 3 years old. He attends Catholic Memorial High School in West Roxbury. He is a rising senior and has played #1 singles at Catholic Memorial since his freshman year. He was awarded Catholic Conference All Star his freshman year and has currently been named the Captain of the team. He runs cross country for his school and is an active member of his State Champion Speech and Debate Team. He was the recipient of the Dingman Cup in 2020.
James looks forward to teaching and having a great summer.

Brendan Julian - Brendan is a rising junior at Boston College majoring in Business. He is a graduate of Catholic Memorial High School in West Roxbury, where he played on their varsity tennis team & was Co-Captain & an All-Star. Brendan was also on their Championship Forensics team & Cross-Country Track team. Brendan is a recipient of the Club's Dingman Cup & joined the teaching staff in 2016.
Brendan hopes to join in the fun at Mashantum, but has an internship that may occupy much of his summer.
Assistant Staff:
Tatiana Malone
Eva Ng
​Joseph Malone